There are numerous references to pendulums and dowsing tools in the art and literature of many ancient civilizations dating back as far as eight thousand years.  These types of tools were also used by the Greeks and Romans of classical times, as well as the Celtic Druids and ancient Chinese.

In 1949, while searching for evidence of lost civilizations in the Atlas Mountains of North Africa, a group of French explorers found a massive system of caverns known as the Tassili Caves. Many of the walls in these caverns were covered with wonderfully preserved pre-historic paintings. One of the most remarkable ones that they found was a huge wall painting of a dowser, holding a forked branch in his hand searching for water, surrounded by a group of admiring tribesmen. The wall murals in these caverns were carbon dated and found to be a least eight thousand years old.   [Reference: https://dowsers.org/dowsing-history/  Article by Lloyd Youngblood. Please visit this wonderful site for more comprehensive information about the history of dowsing. ] 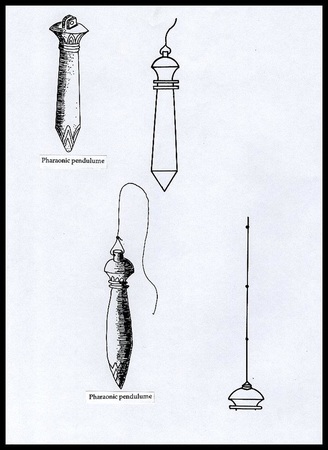 Illustration of ceramic pendulums which were found in Egyptian tombs
Etchings have been found on four-thousand-year-old Egyptian temple walls of pharaohs holding devices in their hands that resembled dowsing tools.

And it is said that Queen Cleopatra, who came to power in Egypt around 47 BCE, had dowsers with her at all times.

Amazingly, the Cairo Museum has a display of ceramic pendulums which were removed from several thousand-year-old tombs (see illustration at right).

Today’s European method of dowsing (the method we use at Springbank Energy Healing) evolved from the system practiced in ancient Egypt. This system was based on quantum physics and sacred geometry; and some of the pendulums in use today were modeled on the originals found in these ancient tombs.


​WE OFFER A COURSE ON THE USE OF PENDULUMS AND OTHER DOWSING TOOLS.
LEARN HOW TO USE THEM FOR YOUR HEALTH, DIVINATION AND WORKING WITH ENVIRONMENTAL ENERGIES. SEE DETAILS BELOW.

THE ART & SCIENCE OF DOWSING: IN-PERSON ONLY
​Next class: ON REQUEST - Can be scheduled at your request.
One day session from 10:00 to 5:00
Cost: $225 (includes cost of a brass Super ISIS pendulum).  $50 deposit* required at time of registration.
​* Deposits are non-refundable, but can be transferred to a different class date.

Dowsing (the use of pendulums, dowsing rods, etc.) provides you with wonderful tools to manifest more of what you want in your life, and less of what you don’t.  Once you step into the world of dowsing for health and information, you will be amazed by what you will discover.

​The pendulums that we will focus on are based on the pendulums and tools which were developed over many years by European researchers.  They are based on very specific shapes and have the ability to emit and pick up certain frequencies and wavelengths; and many have shapes based on the principles of sacred geometry.  I will start you off with a brass 6 ring Super Isis pendulum which is included in the cost of the course.  (​​​The Isis is the most known and used of these types of pendulums.)

A full-colour booklet and course completion certificate are included.  Here's what you will learn:

Some of the pendulums we use in our practice: 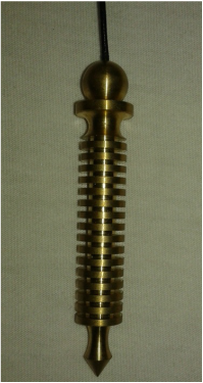 Super-Isis 16 Pendulum
The Isis pendulum (named after the goddess Isis)  is the most common Egyptian pendulum in use; its shape represents the Cross of Life. The original version had four amplifier rings, which act as a battery creating very high dowsing sensitivity. The more rings the Isis pendulum has, the more powerful it is, as any additional rings provide more amplification of energy down the shaft of the pendulum. This aspect is particularly beneficial when used for therapeutic treatments.

The Super-Isis 16 has sixteen rings which enables it to detect and emit not only the full spectrum of white light, but also the frequency of gold - the highest frequency known.  It is an exceptional therapeutic pendulum and is extremely precise when used to balance a person or an environment. 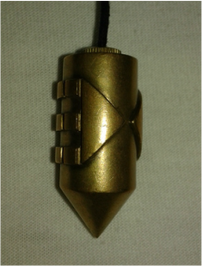 Atlantis Pendulum
The Atlantis is based on the Atlantis Symbol of Protection which is carved around it. The symbol is based on one of the principles of Sacred Geometry called the Golden Proportion.

It is known for its protective as well as its therapeutic abilities, and is an exceptional pendulum for dealing with the removal of negative energies both from people and the environment. 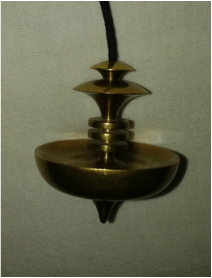 Mer-Isis Pendulum
The Mer-Isis is one of the most effective pendulums for healing work, especially for releasing pain.

It vibrates with the white and violet light frequencies which are the most healing vibrations of all. It works to release pain from a specific area, and then infuses the area with healing energy. 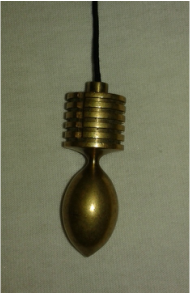 Golden Hue Pendulum
The Golden Hue is one of the most advanced pendulums with therapeutic abilities. It is able to radiate the frequency of gold  as well as recognize the presence of the vibration of gold.

It is a very effective healing pendulum for addressing any health issues, and enhancing the energy of any environment. The golden hue can overwrite negative energies and harmful vibrations such as electromagnetic fields (EMFs) .